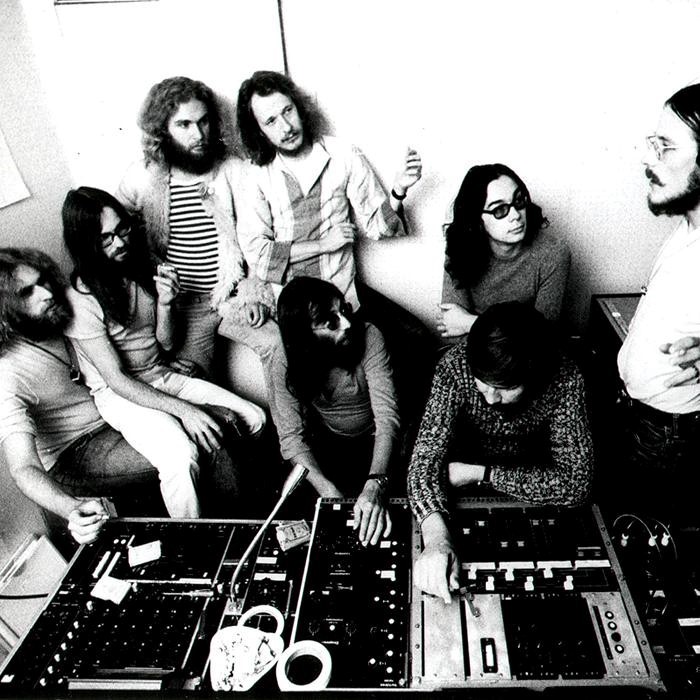 Faust (German: fist) are a German krautrock band. Formed in 1971 in Wümme, the group was originally composed of Werner "Zappi" Diermaier, Hans Joachim Irmler, Arnulf Meifert, Jean-Hervé Péron, Rudolf Sosna and Gunther Wüsthoff, working with record producer Uwe Nettelbeck and engineer Kurt Graupner. Faust formed in 1971 in the rural setting of Wümme. They secured a recording contract with Polydor and soon began recording their debut, Faust, which sold poorly but received critical acclaim for its innovative approach and established a devoted fanbase. Faust became one of the premier bands in the international appreciation of the genre that would eventually be known as krautrock. Faust became one of the first acts to sign to Richard Branson's Virgin Records, who embarked on a marketing campaign somewhat daring for its time, aimed at introducing Faust to British record-buyers. The Faust Tapes was a cut-and-paste album which spliced together a large number of bits and pieces from their extensive collection of private recordings, not originally intended for release. Virgin issued it at the then price of a single, 48 UK pence. The Faust Tapes reportedly sold over 100,000 copies but its low price tag rendered it ineligible for a chart placing. Faust broke up in 1975 after Virgin had rejected their fifth album (some of the recordings later appeared on the "Munich and Elsewhere" album), but reissues of their recordings and various additional material through Chris Cutler's Recommended Records maintained a level of interest. Faust experimented with the presentation of some of their records. Their first album was originally on clear vinyl in a clear sleeve with an X-ray of a human fist silkscreened on the outer sleeve ("faust" is German for "fist"). The second album, So Far made extensive use of black, though inside the sleeve were sheets with one illustration for each song. The Faust Tapes had a visually disturbing op art cover design by Bridget Riley, while that for Faust IV consisted of a series of blank music staves. After Faust's breakup, the group's whereabouts were unknown; the Recommended Records catalogues talked about the group's "disappearance". The official website lists three concerts during the 1980s, and the "Patchwork" album, a compilation of outtakes, feature three snippets that were recorded in the 1980s, but apart from that, the group's activities between 1975 and 1990 remain shrouded in mystery. In 1992, members Irmler, Diermaier and Péron reunited for performances. In 1994, Faust toured the United States for the first time, with Péron and Diermaier assisted by Steven Wray Lobdell and with members of Sonic Youth as an opening act. They have continued to perform in various combinations and with various additional musicians ever since. In the booklet for The Wumme Years box set, Péron announced that Sosna had died on November the 10th 1996. Gunter Wüsthoff has not taken part in any of the reunions. Diermaier has always been behind the drum kit. Irmler was present, but contributed little to the reunited groups' first concerts, and did not participate in the 1994 US tour, but took a more active role after that, producing the groups' records and releasing them on his Klangbad label. He also compiled and edited the "Patchwork" album. The original lineup of Faust in the early 1970s. In 1996, Diermaier and Péron meet Olivier Manchion and Amaury Cambuzat (Ulan Bator). They performed for the first time together as "Collectif Met(z)" in November 1996 (this quartet is the basis of an actual Faust line-up and this concert is part of a 2005 release). A few days after, Faust performed at the Garage in London and at the Transmusicales de Rennes, featuring Chris Cutler. Péron left the group in June 1997. From mid-1997 to 2004, Faust tours as Zappi W. Diermaier, Hans Joachim Irmler, Steven Wray Lobdell, Lars Paukstat, Michael Stoll. Diermaier and "art-errorist" Péron rejoined in 2004 by immediately recording Trial and Error, a DVD released in 2007 by Fuenfundvierzig Label. Zappi proposed to Péron to start a "new" Faust together with Olivier Manchion and Amaury Cambuzat from Ulan Bator. Diermaier/Péron's new Faust made their debut at the Art-Errorist Avant Garde festival in Schiphorst, Germany, where they also presented a new release entitled Collectif Met(z), a collection of live, new and unreleased songs. This incarnation of the group has been extremely active, releasing several CD-Rs and DVD-Rs and touring extensively, including a very successful autumn 2005 UK tour, released in 2007 as ... In Autumn by Dirter. This release also features ex Henry Cow saxophonist/flautist Geoff Leigh, vocalist Lucianne Lassalle, poet Zoë Skoulding and the members of the Welsh group Ectogram. In April 2007 the trio of Diermaier, Péron and Cambuzat performed at a Rock in Opposition festival in France in April 2007. The trio also recorded a new album entitled disconnected which was mixed by Steven Stapleton and Colin Potter of Nurse with Wound. It was released to tie in with the 2007 Schiphorst Avant Garde festival in July 2007. C'est com... com... compliqué, the second album of this trio lineup was released in February 2009 on the Bureau B label. Faust now exists in two completely different incarnations, both active and each reflecting different aspects of the original group. Nettelbeck died on 17 January 2007. In 2010, Faust with members Jochen Irmler, Lars Paukstat, Steven W. Lobdell, Michael Stoll and Jan Fride released a new studio album, Faust Is Last. In 2011, Faust with founding members Jean-Hervé Péron and Zappi W. Diermaier and the British artists Geraldine Swayne and James Johnston recorded a new studio album, Something Dirty.